DISCLAIMER: The aim of this blog is not to offend or attack anyone. While I do admit that some of these people would highly benefit from a little discipline, please do not go and cause harm to the people referenced in the blog. I do not condone malicious behavior. Thank you for understanding.

As the title suggests, this post will touch on the theme of exploiting badly coded botnets, usually ones owned and operated by skids. I never really took interest in such a topic before and therefore knew very little about the “cool” DDoS community. That is, until recently. From my understanding there are two main botnet variants which are constantly being ripped off and modified - Qbot and Mirai. It seems that certain people want to “improve” the base versions of the botnets and implement more advanced features such as failed logon attempts, new DoS techniques, bruteforce prevention and so forth. This enables them to “sell” spots on their botnet (meaning that people can pay to have access to the control server and boot people offline) or sell the modified botnet source altogether. 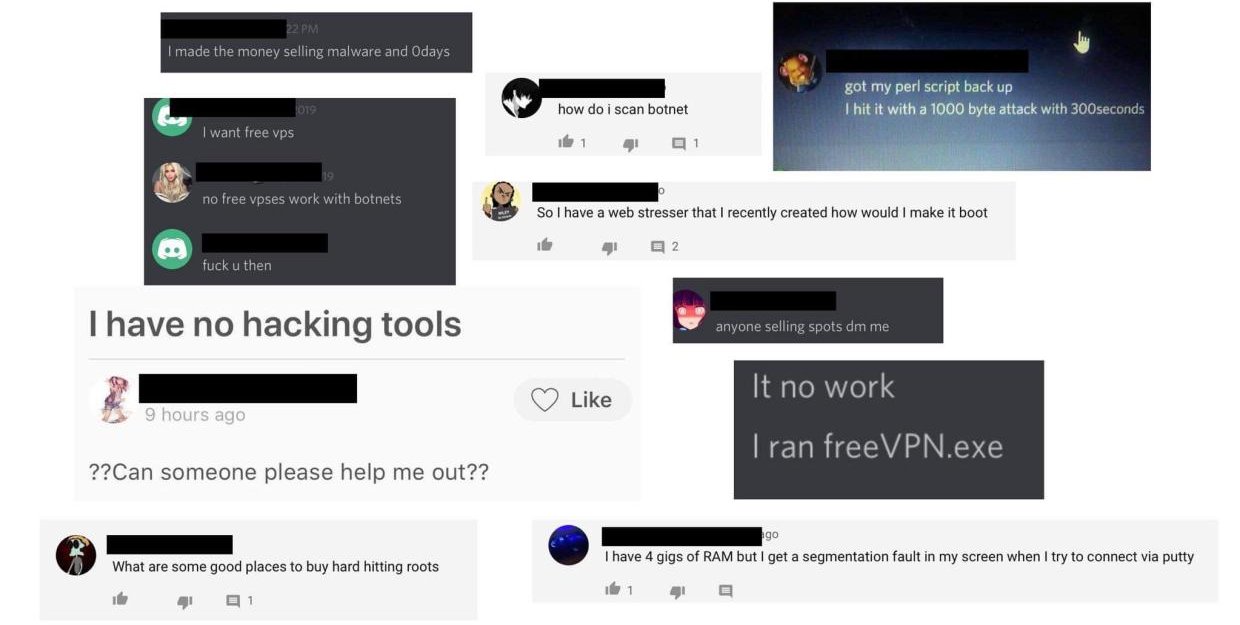 Many of these abused botnets are coded in C, a language so powerful yet so dangerous that if used by untrained coders, can lead to certain disasters - such as we are about to see. Anyone with basic knowledge in binary exploitation knows that a small mistake in this language such as miscalculating a memory allocation for a buffer or using an improper format specification when calling printf(), can lead to some serious vulnerabilities. This blog will cover only 1 out of 3 vulnerabilities that I found in Qbot based botnets. On the bright side, it will be the most severe one. If you’re disappointed with my decision and are one of these people: 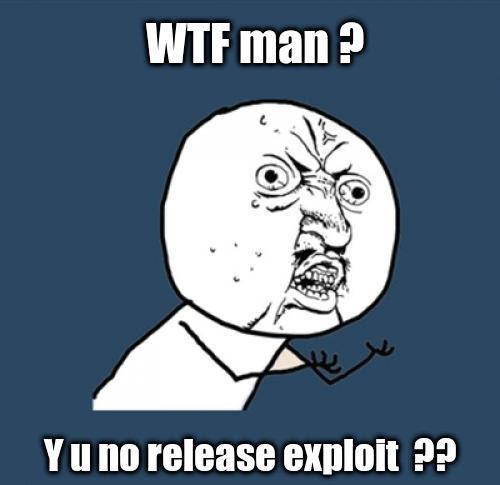 Then I’m sorry, but I do not wish to initiate skid wars where kids pop shells on each other’s Digital Ocean servers.

So without further ado, I discoverd a pre-auth RCE vulnerability in the Miori v1.3 botnet due to improper input handling and usage of the system() function. Let me say that again, a PRE-AUTH remote command execution vulnerability. Someone managed to make a big mistake when modifying the Qbot source code - maybe next time they should stick to Python ¯\(ツ)/¯.

Anyway, it would be a shame if we exploited this vulnerability to hijack the server :).

Setting up a local environment

Note: The botnet server needs to be RedHat based because the setup script uses yum to download dependencies.

The particular file of interest to us is the cnc/cnc.c file. This is where the main “operator” functionality for the botnet can be found, which includes the login, registration and attack functionality. Example pictures are provided below.

The overall UI is actually pretty nice, and it seems like someone definitely spent a lot of time on it. Fortunately for us they didn’t spend a lot of time on the main code. I dare say it’s atrocious. Multiple oversized char buffers, 42 returns and 3 exits…, horrible indentation, mix of tabs and spaces, 76 goto statements (in 2019… really?). And such issues in the code go on forever. I guess that’s what happens when the main goal is to make cool looking UIs and to make money instead of making something reliable and readable. Just so you get an idea of how the code looks, feel free to click on the image below to enlarge it. 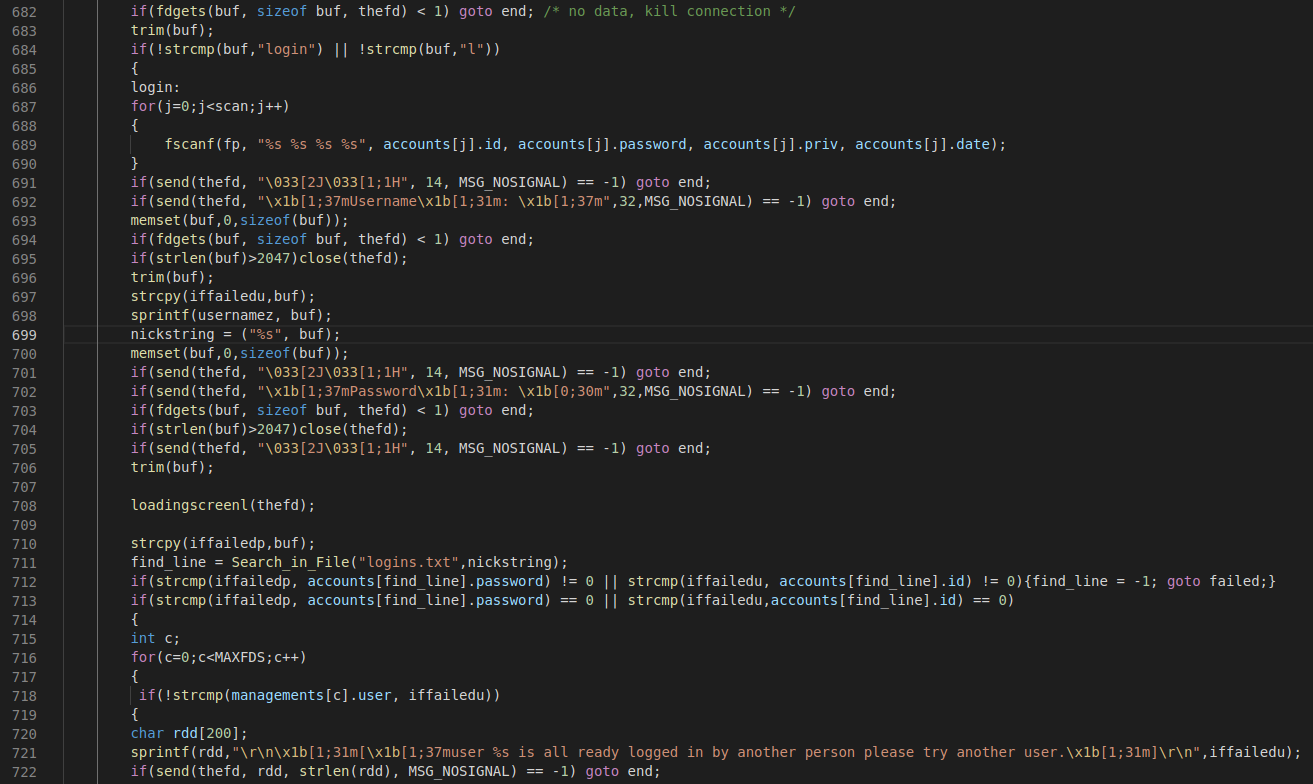 - Journey of finding an exploit

Yes, I actually tortured myself so much that I went over the core of the cnc.c code. It doesn’t take a professional to spot that lines 793 and 794 are exploitable.

Do you see it? iffailedu and iffailedp are arguments representing failed username and passwords respectively. This allows logging for failed authentication attempts. The idea itself isn’t that bad but the implementation is horrible. Using system() functions instead of C’s file I/O functions. Why? The answer is quite simple.

It’s obvious as to why this is happening. A large percentage of botnet operators are simply following tutorials which have spread around in the community or are accessible on YouTube to set up their botnet.

In a less severe case a buffer overflow can occur in this section as flog has 1024 bytes allocated but iffailedu and iffailedp can be up to 2048 bytes. Each of these are based on the buf variable on line 637 and the corresponding strcpy() logic below. However the juicy vulnerability is yet to come.

A blind command injection is possible by escaping the echo command which is called in the system() function. Let’s simplify the scenario with a username only.

If a user logs in with an invalid username (let’s say jack), the system function runs echo "Failed login with username jack" >> failed.txt.

An attacker can supply a malicious username (and any password) that will allow him to run a command of his own. This can be achieved by using input like this: v3ded"; touch /tmp/hacked; #. System is then forced to run echo "Failed login with username v3ded"; touch /tmp/hacked; #" >> failed.txt. The hashtag (#) acts as a comment in bash, effectively commenting out rest of the command. That means that our command never gets piped to failed.txt and never gets logged :). Hooray! Afterwards, our exploit can be easily verified by SSHing into your CentOS server and checking for the presence of our hacked file in the /tmp directory. POC is attached below.

This error log alerts the operator, but due to lack of proper technical knowledge I doubt most of them will understand what happened. Still, let’s not leave it up to a chance and hide the error log with a clear command in the following section.

Let’s start out by supplying the required imports, making a socket, and connecting it to the server-port combination we supply.

Afterwards we need to simulate the login process. We can do that by simply sending 3 messages to the server - login, username payload and password respectively.

Note: One kind redditor pointed out I can pipe the output to /dev/null instead of doing clear. A lot better! I wonder why I forgot about such a trivial thing :).

Note: CentOS doesn’t come with netcat preinstalled. Have that in mind when choosing a reverse shell or attempting data exfiltration

As you can see, Bash is used in combination with /dev/tcp/ to create a reverse shell. It’s important to notice that each command send contains a carriage return (\r) and a new line feed (\n). Without the CRLF our exploit wouldn’t work.

The core of our exploit is now finished. Let’s improve it just a tiny bit by adding a horrible global try-except and our own netcat listener.

Now we can execute the exploit against a botnet server! If successful, it should all look something like this:

Cool, right? Although when configured properly on a proper port, the botnet won’t run as root. But with the default root user on various hosting providers and the fact that our skiddies copy paste commands without knowing what they do, I bet most of your shells be will root. 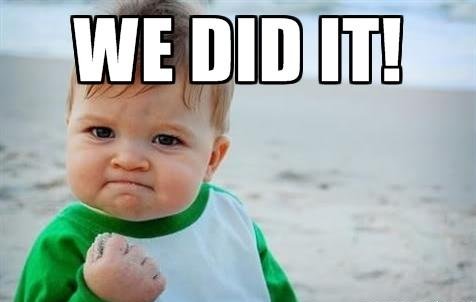 Thank you dearly for reading if you got this far. This blog is an unusual distraction from my regular CTF blogs, so i hope it was to your liking. I would like to thank my friend Jack for encouraging me to write this blog and the whole [SG] Switch community for making and distributing badly rewritten botnet versions.

As I was writing this blog, another Qbot rip-off called switchware was released. I didn’t dig into the code much but there is a post-auth RCE vulnerability. It’s a very tight one though, as the buffer is limited to 50 bytes and 45 are already supplied. If this blog gets enough traction I can make a second post :). If not, well, you can try to exploit it as an exercise. The exploitable code is on lines 557, 558 and 566.

A quick PoC below: